Yes, your marriage can be saved! 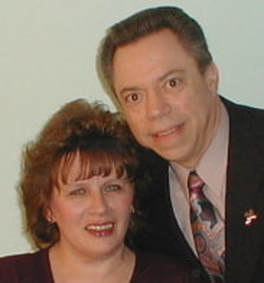 ​Bill and Penny were married as teenagers in 1968. After four years in the military Bill pursued a career in sales-engineering.

In 1981 Bill left his position as Director of Engineering for a mid-size manufacturing firm to respond to the call of ministry. He began pastoring a small United Methodist Church, then later, Bill and Penny pioneered a new church -Living Waters Assembly of God in Higland Falls, N.Y.

In 1990 Bill and Penny began experiencing marriage difficulties that made it necessary to step down from the pulpit to focus on restoring their marriage and home. They have two children, Dulcinea was born in 1973, and Bill Jr., born in 1976. With the help of valued counselors they were able to work through their issues and save their marriage from becoming one of the tragic divorce stories plaguing our nation today. In 1993 Bill resumed his calling to the ministry -this time as a counselor. Bill received his academic training for counseling and ministry from Wesley Theological Seminary and The Berean College of The Assemblies of God. He is a licensed Professional Clinical Member of The National Christian Counselors Association, a national trainer for PREPARE/ENRICH, Life Innovations, Inc. Both Bill and Penny are ordained by Elim Fellowship, Lima, NY. Penny is also a member of the American Association of Christian Counselors.

Since 1993 Bill has been ministering full time as a pastoral counselor. In October 1997 Bill and Penny established Marriage & Family Savers Ministries. Bill and Penny have an ever-increasing burden to save marriages, even as their own was saved. Using the professional training they've acquired, and perhaps more importantly, the experience they've had working through their own marital difficulties, they've seen exceptional results in restoring marriages from what would appear to be hopeless situations.

It is their vision to see the divorce rate plunge for the benefit of millions of children, the preservation of a culture, and to the glory of God.